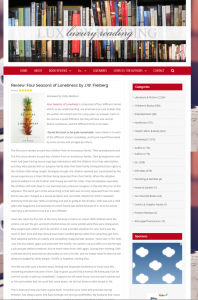 Four Seasons of Loneliness is comprised of four different stories which, to my understanding, are all actual true case studies that the author chronicled over his many years as a lawyer. Each of the stories is quite different, but they all have one central theme–loneliness, and the different forms it can take.

I found this book to be quite remarkable. I was drawn in to each of the different stories completely, and found myself fascinated by some stories and enraged by others.

The first story centers around two children from an incestuous family. Their grandparents and mom had been having sexual orgy-type interactions with the children since they were babies, and they were placed with an adoptive family after their birth family relinquished their rights to the children after being caught. Strangely enough, the children seemed less traumatized by the sexual experiences in their life than being separated from their family. When the adoptive parents walked in on the brother Seth having sex with his sister, they immediately separated the children and took steps to sue basically every previous caregiver in the kids’ life prior to the adoption. The worst part of the whole thing is that Seth was not only separated from his sister, but he was also charged as a sexual predator and convicted, despite his sister’s repeated testimony that she was 100% consenting and just as guilty as her brother. Seth was just a child when this happened, and basically his entire future was forfeit because of it, since he would now have a permanent record as a sex offender.

I was very upset by this part of the story because it seems so unjust. Both children were the victims, not just the girl, and both children knew (to some extent) what they were doing when they sought each other’s arms as comfort. It was a terrible situation for sure, but it was the norm in their lives and they should have been handled gently rather than what they got from their adoptive parents–an utterly and completely inappropriate reaction. Years later in life, Seth runs into the author again and visits with him briefly. He reaches out and offers to help him get a job and get settled somehow, but he never hears from Seth again. During their meeting, Seth confesses that he basically has absolutely no one in his life, and no matter what he does he will always be judged by other people. It feels so hopeless, reading that.

This left me with such a broken heart, feeling that desperate loneliness he must have felt…wondering whatever became of him. Did he grow up and find a normal life eventually? Did he commit suicide or give up completely? I suppose we will never know, but my heart reaches out to him and wishes that he could find some peace. He did not deserve what he got in life.

This is how you know you have a good book. It touches your heart and provokes strong emotion. Not always warm and fuzzy feelings, but strong nonetheless. My husband and I want to be foster and adoptive parents someday, and the example set forth by Seth’s would-be adoptive parents is a strong example of what not to do. It’s also a reminder that things aren’t always black and white.

The next story was equally interesting, and completely different. It centered around Sidney Rittenberg and his retelling of events in his early life in revolutionary China. He started out as a U.S. soldier who ended up getting stationed in China, and he fell deeply in love with both the country as well as the romanticized Communism of that time (which I learned a lot about — both the good and the bad – by reading this story). He ended up staying on and became deeply involved in the Communist party, only to be betrayed by it when the leaders suspected him of being a traitor (which he was not). He ended up doing not only one stint in solitary confinement, but two. During his first imprisonment, the only thing that kept him from going insane was his love of the Communist party and his imaginary bonds to it–the party itself literally kept him from falling to pieces, as he imagined himself re-assimilating into it once they realized what a mistake they had made. The second time, he began to see the party for what it actually was, and realized how misled he had been. He focused all of his energy attaching himself to his home – the United States – and finding a way to bring his family back there once he got out.

He got so malnourished at some points that he was forced to eat crickets and cockroaches just to survive, and I cannot even begin to fathom how difficult it would have been to be alone for years and years without any human interaction. The strength that Sidney showed, and the fact that he came out of it all as this amazingly peaceful (and sane) man, able to tell his story, is utterly remarkable. This story of loneliness was a reminder of how strong the human heart can be… how we can literally find something – anything – to live for when times are darkest.

I will leave the other stories as a mystery so there is something for you to look forward to, but they were both beautiful and different in their own ways as well. Both stories centered around people who were more connected with imaginary stories (such as famous romances or fictional characters) than with real people. I remember one part of the book where a truck driver, Pail Cardarelli, mentioned that all of his greatest friends (in the books he loved) had been dead for centuries. I understood what he meant. I love to read, and often find myself connecting better with fictional characters than with actual people. At the end of a good book or book series, I often find myself feeling a sort of emptiness as if I had lost a good friend. I completely understand where he was coming from.

All in all, I would highly recommend this book. As I said before, it’s not necessarily a feel-good book, but it’s an exceptional set of stories that really showcase human emotion and different forms of loneliness, and I’m very grateful that the author took the time and effort to write it all down. He sounds like an empathetic and truly amazing person, and each of the people in his book were lucky to have met someone who cared as much as he did.

Holly has a Bachelors degree in Environmental Science and owns a small business with her husband selling fleece and hand-spun yarn. When she is not spinning yarn, she does freelance work as a graphic design artist and is highly involved in animal rescue.

Review copy was provided free of any obligation by J.W. Freiberg. No monetary or any other form of compensation was received.